Attack of the Birds

A few weeks ago, I was walking through the streets of Ann Arbor, Michigan with a group of other professionals from the Columbia Chamber of Commerce’s yearly Leadership Visit when Jonathan looked up from his phone and said, “There’s a nest nearby.” We dashed across the street and snagged the last two Birds.
Moments later, a college kid running late to work appeared looking for a quick ride. As we logged into our scooters, he ran off in search of another nest. We guided our Birds into the street, hit the throttle, and we were ﬂying.
Well, maybe not ﬂying. After all, Bird scooters only go about 15 miles an hour, but in contrast to the slow pace of walking, it sure felt like it. 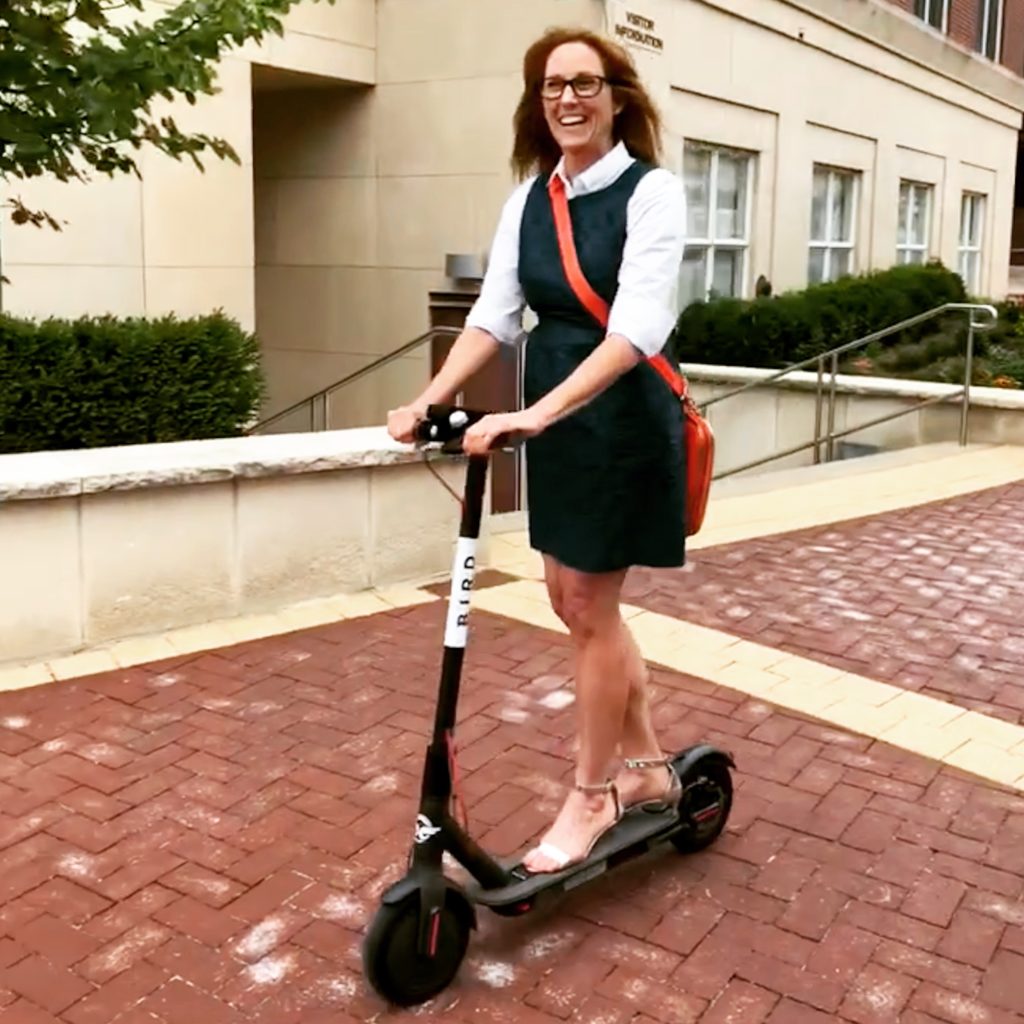 Bird scooters ﬁrst appeared in southern California — where the company is based — but their recent nationwide roll-out was aimed at college towns and timed to coincide with the start of classes.
The scooters are battery operated, app-driven, and cost $1 to unlock and about 15 cents a mile after that. They materialized overnight here in Columbia—downtown, on campus, and even on The Loop—all places with large student populations who are sure to be quick adopters. 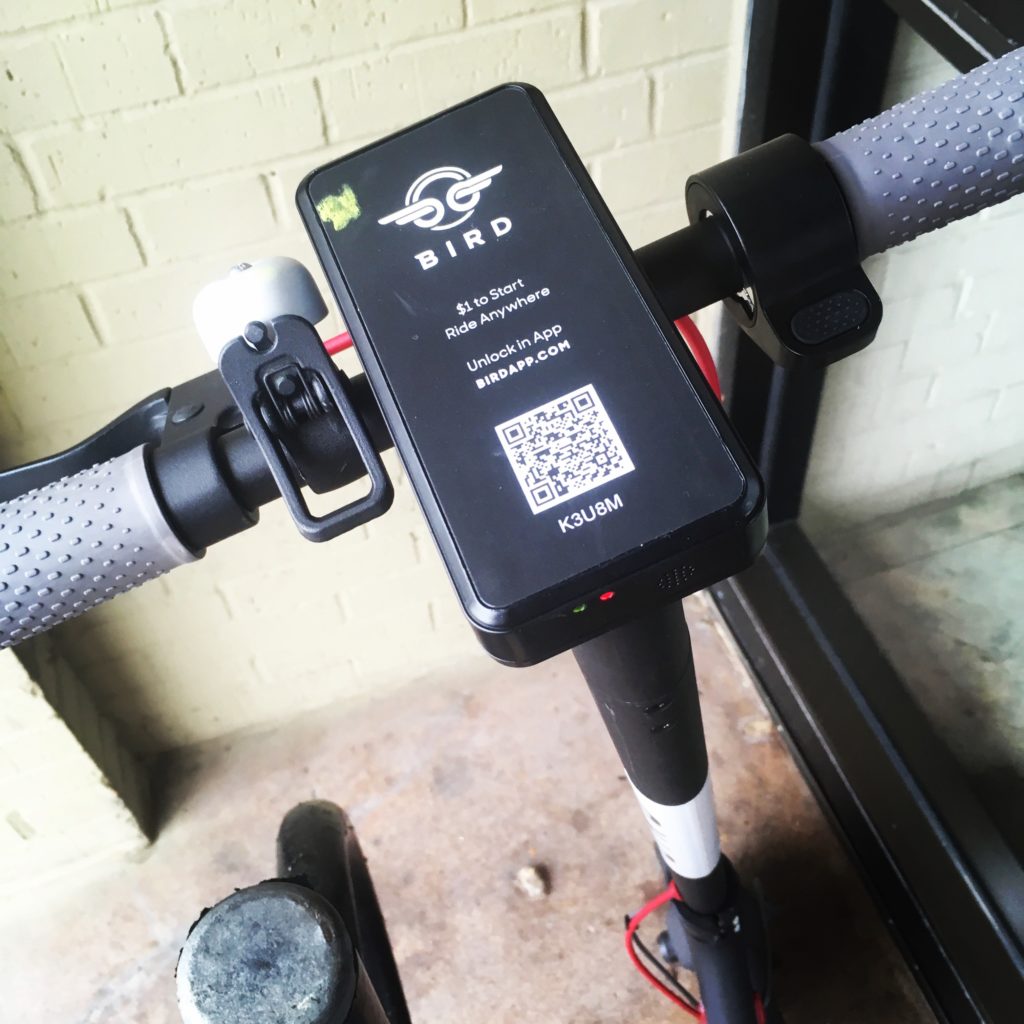 I’m a big proponent of the park-once approach to cities. If you must take a car downtown, park it in a garage and then walk everywhere you have to be. But if your destination is a little out of the way—say traveling from Parkade Plaza down to Carlito's for lunch—a Bird is more convenient. They’re designed for short trips, easier to park than cars, and more decorous than a bike (especially when one is wearing a dress). I love walking through cities but the Birds are a breezy alternative.
So what, then, is the problem? You may have heard that MU has banned them from campus. Cities across the country are up in arms over the infestation of Birds. In fact, just after our visit, Ann Arbor began confiscating the scooters.
It’s less about the scooters themselves and more about the commitment to disruption underpinning the business model of companies like Bird or Uber. The scooters appear in a city overnight without warning. They are parked in the middle of the sidewalk, no one is instructed on the rules of the road, and they use city infrastructure without contributing to its upkeep. Alternative modes of transportation are great; flaunting the rules we all live by is not. 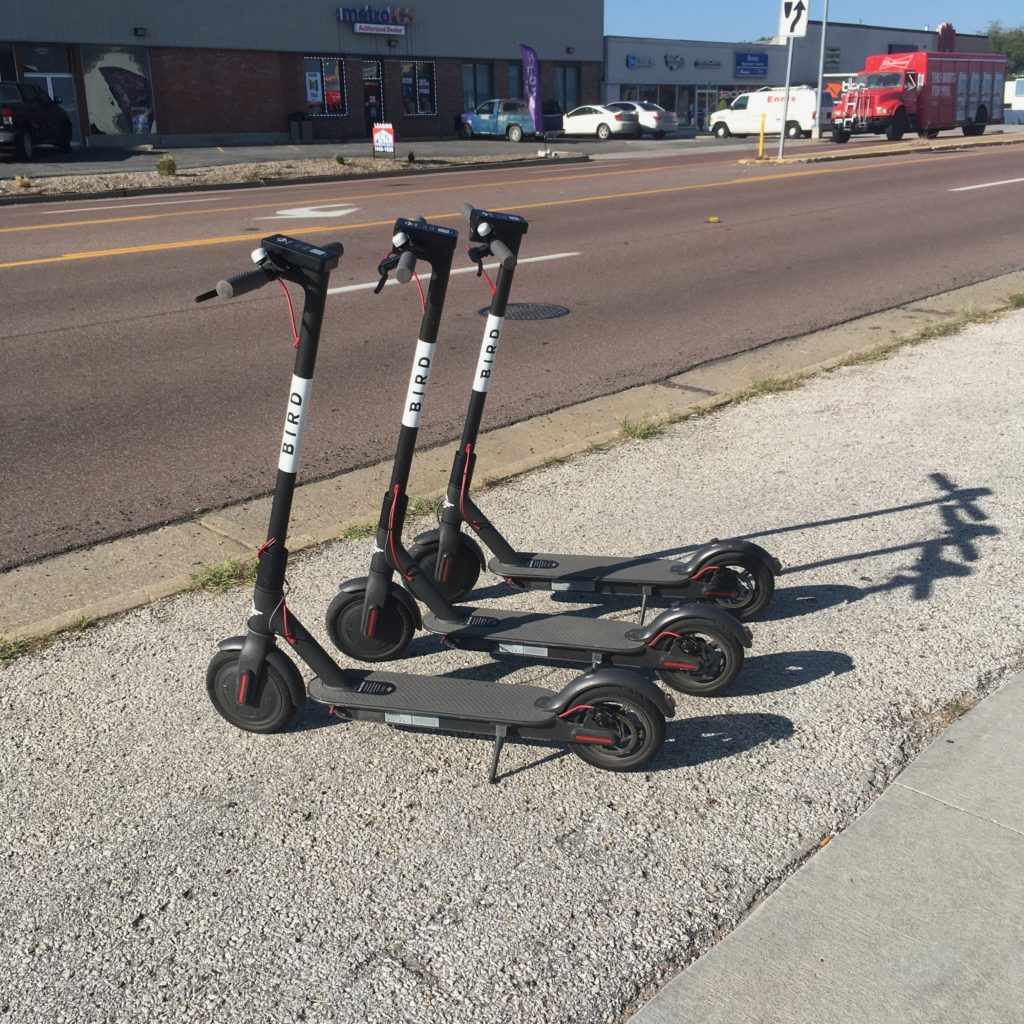 So, what are the rules? First, don’t ride on the sidewalk—it’s far too dangerous for pedestrians. (Yes, I know I’m on a sidewalk in the picture, but we thought it advisable I didn’t try to pose for a photo in the middle of trafﬁc!) Birds should be ridden like a bike, either in the bike lane or sharing the road if it’s narrow. There is a nest of Birds at the corner of Madison and the Business Loop just adjacent to the Bike Boulevard and yes, it's ok to ride down the Bike Boulevard as long as you play nice with the bikes.
Second, don’t leave the scooters parked in the middle of the sidewalk where they block pedestrians and people in wheelchairs. Pedestrians have a tough enough time as it is because we don't have continuous sidewalks down the length of the street. Make it easier on them by parking the scooters off the sidewalk. Riders can locate Birds via GPS so tucking them someplace away from pedestrians won't do any harm.
And what about the larger question we should be asking of these new, disruptive forms of transportation like Bird, Uber, and Lyft? They use city infrastructure—streets, sidewalks, and valuable curbside space—but are they helping pay the bills? The city is in the process of negotiating a contract with Bird, but the fact that we had to reach out to them speaks volumes. So, let’s embrace these new forms of transportation but insist they embrace our community in return.
This article originally appeared in the Columbia Business Times.
[sgmb id=1]